Historia Brittonum: A History of the Brittonic People

Introduction to Historia Brittonum; and its sections

Historia Brittonum (History of Britons) is a purported history of the indigenous Brittonic people.  The text is reputed to have been written c AD 828/829, and survives in numerous recensions that date from after the 11th Century AD.  The Historia Brittonum is commonly attributed to Nennius, as some recensions have a preface written in his name. The Historia describes the settlement of Britain by Trojan exiles and states that Britain took its name after Brutus, a descendant of Aeneas.  The Historia was the “single most important source used by Geoffrey of Monmouth in creating his Historia Regum Britanniae”, according to John Thomas Koch.  Via the enormous popularity of the latter work, this version of early British history would become incorporated into subsequent chronicles of the history of Britain.

The Historia was the first source to portray King Arthur, described as a “dux bellorum” (‘military leader’, ‘duke of battles’) or miles (‘warrior, soldier’), not as a king.  It names the twelve battles that Arthur fought, yet none are assigned actual dates.  (If one thinks that dates are assigned to events in the Annales Cambriae, one would be mistaken.  The years are numbered from 1 forward.  An assumption is made for the date of year 1.

Therefore, the Annales Cambriae cannot be reliably used to corroborate any dating of events listed in the Historia.)  According to Robert Huntington Fletcher, the reference in the Historia Brittonum to Arthur carrying the image of Saint Mary on his shoulders during a battle has been interpreted by later commentators as a mistake for Arthur bearing the image of Mary on his shield.  The error, Fletcher says, is caused by the similarity between the words in Welsh for ‘shoulder’ and ‘shield’.

According to Norris J Lacy, various introductory notes to the Historia invoke Nennius’ (or the compiler’s) words from the Preface that “I heaped together all I could find” from various sources, not only concrete works in writing but “our ancient traditions”.  Theodore Mommsen states that this is quoted from the Apologia version of the Preface.  Giles’ translation rendered this as “I put together”, concealing the fact that this is indeed a quote from the work and not from some commentator.

Leslie Alcock was not the first to draw attention to the phrase though he may have started the recent surge of interest.  However, ‘pseudoNennius’ still clearly aimed to produce a synchronised account.

Historia Brittonum was written no earlier than the “fourth year of [the reign of] King Mermenus” (King Merfyn Frych ap Gwriad of Gwynedd).  Historians have assigned AD 828/829 to the earliest date for the work, which is consistent with the statement in chapter 4 that “from the Passion of Christ 796 years have passed.  But from his Incarnation are 831 years”.

This assessment is supported by John Thomas Koch, David N Dumville, and N J Higham.  It assumes a consistent birth and death/resurrection dates for “Christ”.  Unfortunately, speculation on pinning down these dates with any amount of accuracy whatsoever is beyond the scope of this present article.

Suffice it to say that a “birth year” is assumed to be 3/2 BC, and a “death/resurrection year” is AD 32/33.  These are in line with established Church doctrine, dogma, and tradition of the time.  The text makes use of two narrative techniques which are generally considered not reliable by modern academic standards: the synthesising and synchronising of history.

Synthetic history combines legendary elements with fact, which makes the veracity of the text challenging to evaluate.  This is also known as historicised myth, or even possibly a form of re-historicised mythologised history.  Various false causal connections and attempts to sync material from different sources and traditions also contribute to undermining the Historia’s reliability.

Affects on Arthurian Legends and Myths

The Historia has drawn attention because of its role in molding legends and myths surrounding “King Arthur”.  It is the earliest source that presents Arthur as an historical figure, and is the source of several stories which were repeated and exaggerated by later authors.  Referring to an earlier statement, these stories are either historicised myth or re-historicised mythologised history.

Traditionally, according to “Nennius”, the Historia contains a story of King Vortigern, who allowed the Saxons to settle on the British Isle in return for the hand of Hengist’s daughter.  In addition, traditionally, there is a legend recorded of Vortigern that concerns his attempt to build a stronghold (Dinas Emrys) near Snowdon, only to have his building materials disappear each time he tries.

His advisors tell him to sprinkle the blood of a boy, born without a father, onto the site to lift the curse.  Vortigern finds such a youth in Ambrosius, who rebukes the wise men and reveals that the cause of the disturbance is two dragons buried under the ground.  This tower/stronghold story is repeated and embellished by Geoffrey of Monmouth in his Historia Regum Britanniae, though he attributes it to Merlin, saying “Ambrosius” is the sage’s alternative name.

Geoffrey also includes Aurelius Ambrosius, another figure mentioned in the Historia Brittonum, as a king in his own right, and includes other characters such as Vortimer (Vortigern’s son) and the Bishop Germanus of Auxerre. 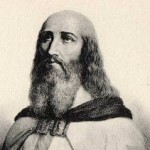 Glyn Hnutu-healh
Glyn Hnutu-healh is the primary author for the Circle of Logres: Encyclopædia Arthuriana project at http://www.CircleOfLogres.com. He is a practicing Druí Alchemist, who is degreed in Physics and a long-time fan of Sci-Fi and Fantasy. Glyn consults (among other things) in matters of History, Genealogy, Alchemy, and Physics.