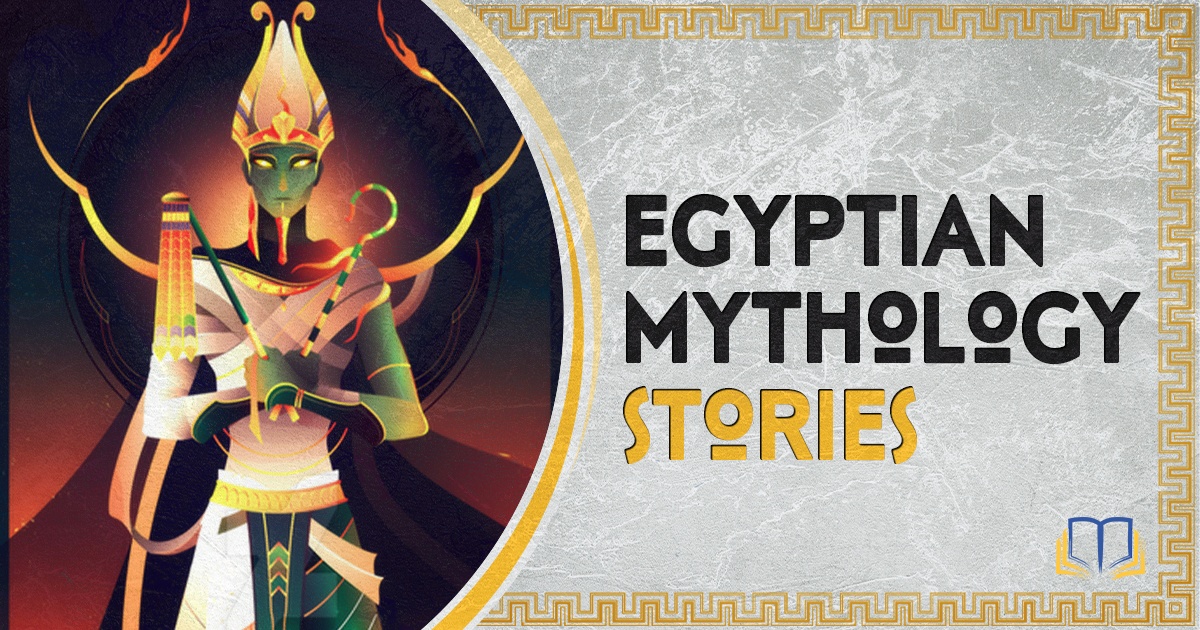 One of the things I like to do when learning about ancient myths is map them out so I have a complete list of every myth, along with a vague idea of chronology. So for this book, I’ve taken all of the Egyptian myths that I could find and charted them in one chronological timeline.

Some of these myths don’t fit any known chronology, but have an internal sequence of events. Others do correlate to actual historical time periods. For those, I’ve tried to place them in the correct order, according to the time period that they correlate to.

So in this article, you’ll find:

Also, I should mention: spoilers for these thousand-year-old myths ahead.

Also, don’t forget to visit our Egyptian Mythology hub, where we have a LOT more articles like this one.

I categorize these first myths as “primordial” because they happen largely outside of normal time and space and involve the formation of many key elements of creation. These myths show the emergence of the Sun god and his progeny.

They include the following:

Once this era ends, we enter the golden age of Egyptian storytelling…

The Descendants of Ra

The string of stories that make up the Osiris myth are the most famous of Egyptian literature. Even though Egyptian Mythology is not as popular in western culture as stories of Hercules or Thor, most have probably heard of Osiris, Isis, or Horus.

So let’s take a look at the stories that make up this epic cycle:

Additional Myths of the Egyptian Pantheon

There are a few other random myths about the Egyptian gods and goddesses. These are hard to place on a specific point of the timeline, so I’ve just included them here:

Pharaohs like Djoser and Khufu were real people, and the first pyramids were built for them. So naturally their legend continues to live on in story.

Then we have the New Kingdom, which is where most of these folktales take place, and probably when most were written as well, though many were likely compiled or written down later. Here are some the best tales from this era:

The great epic here is the adventures of Setna and later his son, Se-Osiris, but it’s also worth noting the influence that Greek thought is having at this stage. Already you can see direct parallels to the siege of Troy in the Taking of Joppa, and direct involvement in the actual story of Troy with the Story of the Greek Princess.

Chronologically, these last stories take place at the end of the timeline, though one of them is less of a story and more of a vague prediction.

The Girl with the Rose-red Slippers: This is a story that takes place during the Persian invasion, several hundred years after the New Kingdom, and closer to Alexander the Great and the overall decline of the Egyptian empire as it was known. During the Persian conquest, Egypt opens itself to Greece. A Greek man named Charaxos falls in love with a slave girl, buys her, and grants her freedom. She has a Cinderella-like story.

End of the Universe: Many Egyptian texts vaguely hint at the end of the world, though it is generally not looked on favorably, like we want to avoid it. In some texts, Atum says he will eventually dissolve the world and all will return to the primordial chaos that once existed and all will cease to exist except Osiris and Atum. But, given the Egyptian affinity for cycles, it’s likely that an orderly world would return once again.

If you know of any other myths from Ancient Egypt, please let me know! I’d love to add any others to this list that I may have missed.

What does Egyptian mythology teach us? Egyptian myth, like all other myths, was meant to explain the world around them. But Egyptian stories particularly focused on the importance of order in driving back the darkness and uniting contenious factions, which may have had something to do with past history of conflict and unification of Upper and Lower Egypt.