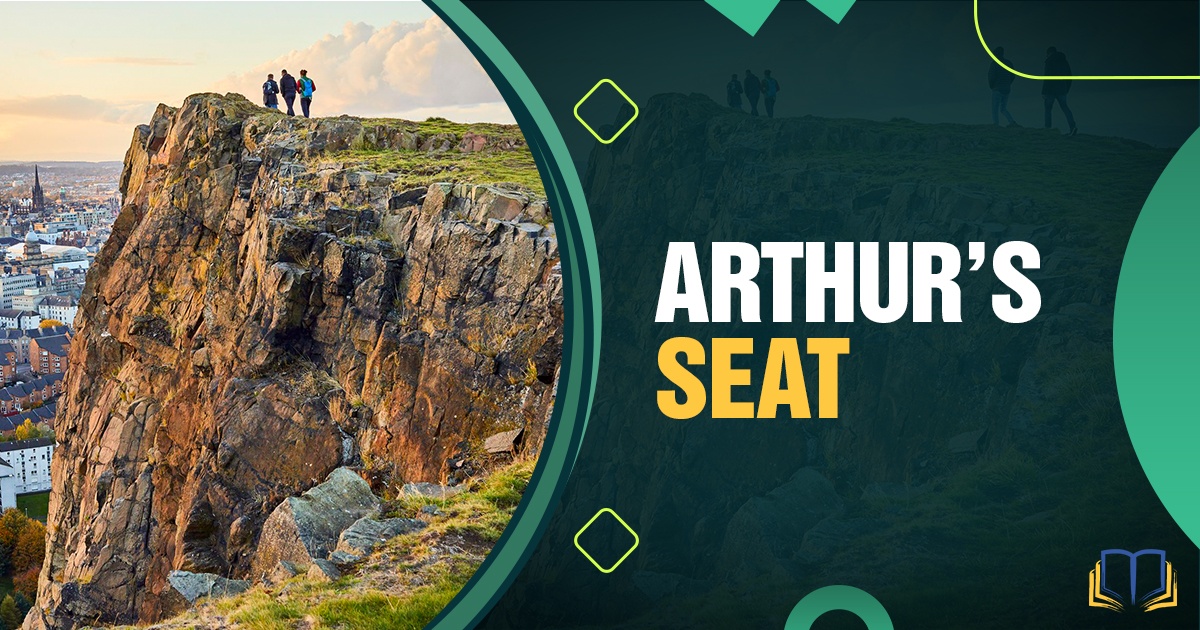 One of the most famous real-world locations that is said to have a connection to King Arthur is Arthur’s Seat, Edinburgh. This is the name of an extinct volcano in Holyrood Park, a royal park composed of a number of different peaks. Arthur’s Seat is the highest of these peaks. It is also the highest point in all of Edinburgh.

As well as being an extinct volcano, there is a large and well-persevered hill fort at the top of Arthur’s Seat. Due to its prominent location in a famous city, and its relatively easy ascent, this volcano is very popular for walks by tourists in the area. It must be said that this is most probably one of the most frequently visited Arthurian locations in all of the British Isles (although, not because of its connection to Arthur).

Or, perhaps most logically, the hill fort at the summit was one of Arthur’s courts. Some have even suggested that it is the location of Camelot (however, for an analysis of which location best fits the evidence for Camelot, see the article ‘Where Was Camelot?’).

In any case, there is a widespread belief that for one reason or another, this mountain was named after King Arthur.

However, many scholars disagree with such a notion. One of the primary reasons, beyond simply distaste for the idea that Arthur was real, is that the name appears to be in English. After all, ‘seat’ is an English word.

The problem with this is that English was not the language spoken by Arthur or his men, nor by the men of Scotland in general in Arthur’s period.

On that basis, some researchers have concluded that this place name was not originally ‘Arthur’s Seat’ at all. Rather, they postulate that the name must come from a Gaelic phrase which became anglicised into ‘Arthur’s Seat’ due to a coincidental similarity to that English phrase.

One particularly common suggestion for the true etymology of the name is that it comes from the Gaelic term ‘Àrd-na-said’. This means ‘Height of Arrows’. Perhaps this was corrupted more or less directly into ‘Arthur’s Seat’ through verbal alteration over time. Or, perhaps inhabitants who spoke both Gaelic and English, knowing the meaning of the Gaelic term, started calling it by the similar-sounding and similar-meaning English term ‘Archer’s Seat’. This could have then been corrupted into ‘Arthur’s Seat’ over the centuries.

An alternative suggestion is that the origin of the name is ‘Àrd-thir suidhe’. This is somewhat closer in sound to ‘Arthur’s Seat’ than ‘Àrd-na-said’ is, so on that basis it is more convincing than the previous suggestion. However, this explanation is not quite so elegant in terms of Gaelic naming conventions.

The fact that there are these alternate theories reveals a significant fact – there is not actually any evidence that the name of this location was ever spelt as anything other than ‘Arthur’s Seat’. The explanation for why it has an English name could quite easily be that it is a translation of the original Gaelic name.

Such a phenomenon is not particularly unlikely. There are many examples throughout the British Isles of places being named something in one language (such as Latin), and then having that name translated, according to its meaning, into another language (such as Brythonic or Old English).

Therefore, it is not at all implausible to suppose that the name of this volcano in Edinburgh was originally a Gaelic term meaning ‘Arthur’s Seat’, and then this was subsequently translated into English after that language began having a prominent impact on Scotland.

Alternatively, it could be the case that it originally had a different Gaelic name, but there was nonetheless some kind of legend about Arthur centred on the area (the apparent basis for such a legend will be considered shortly). Then, based on this legend, the English gave it the name ‘Arthur’s Seat’.

We cannot be sure what the true origin of the name is. Nonetheless, there does not appear to be any valid objection to the most obvious conclusion: that it really was named after a prominent individual called Arthur, presumably King Arthur.

However, is it actually plausible that a place in Scotland could have been named after King Arthur? Of course, it would be unlikely for a place to be named after him if he had nothing to do with the area. So, this depends on whether or not there is any good reason to believe that Arthur was ever actually in the vicinity of Arthur’s Seat.

There is some early evidence that places Arthur in the vicinity of Scotland in general. For example, it is generally held that most of the battles in the Historia Brittonum’s battle list took place in the north of England or even southern Scotland. Particularly notable is the fact that the battle list includes a mention of Arthur fighting at a place it calls the ‘wood of Celidon’, which is widely recognised as a reference to the Caledonian Forest in southern Scotland.

In addition to this, the second earliest record of Arthur’s battles is Pa Gur, a Welsh poem from, probably, the 10th century. This specifically mentions Arthur fighting at Dun Eidyn, which is the Welsh name for Edinburgh. Furthermore, many other records, both Welsh and otherwise, give Arthur allies from Scotland, such as King Lot of Lothian.

Therefore, according to early evidence and later evidence, Arthur was indeed active in the area of Scotland in general and Edinburgh in particular. While this does not prove that Arthur’s Seat was actually named after King Arthur, it does make the idea perfectly reasonable.

Really, whether Arthur’s Seat was actually named after King Arthur or not, the aforementioned evidence gives us good reason to believe that Arthur did engage in battle in the vicinity. In fact, if Arthur really was allied to several kings of this part of the country, as the records claim, than it is conceivable that he may have used the hill fort atop Arthur’s Seat on occasion, either in opposition to the Saxons in wartime, or simply to hold court.

In any case, the earliest evidence gives us valid reason for viewing Arthur’s Seat as one of the few Arthurian locations that actually has a genuine connection to the sixth century king.